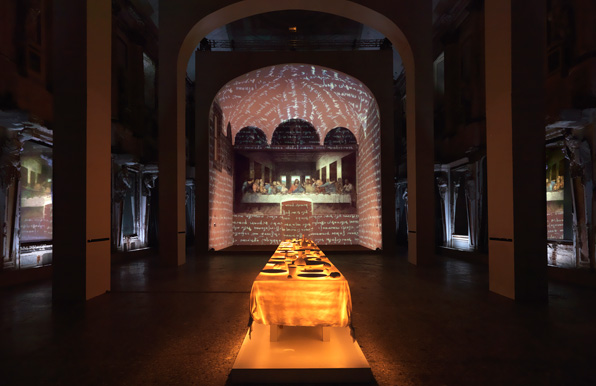 “a bold and utterly distinctive multimedia artist” – The Guardian (London)

Visionary artist and filmmaker Peter Greenaway brings new insight into one of the world’s most celebrated masterpieces in his multimedia reverie of Leonardo da Vinci’s The Last Supper. Set within a full-scale replica of the dome of Refectory of Santa Maria Delle Grazie in Milan, the home of the original painting, a meticulously detailed facsimile of The Last Supper is brought to life through Greenaway’s ingenious manipulation of light, sound, and theatrical illusion. Visitors navigate a series of vivid audio-visual environments that provoke new ways of seeing this iconic work.

Leonardo’s Last Supper is part of Greenaway’s ongoing series Ten Classic Paintings Revisited in which the artist creates a dialogue “between 8,000 years of art and 112 years of cinema.” The Armory’s presentation marks the first time that one of Greenaway’s critically acclaimed artistic installations is mounted in the United States.

A short preview of Leonardo’s Last Supper: A Vision By Peter Greenaway

Click here to listen to an interview of Peter Greenaway by the Guardian’s Robert Booth.

Click here to read Jonathan Jones’ review of Peter Greenaway’s Last Supper in Milan, 2008
”...an audacious act - and a triumph”

About Peter Greenaway
Born in Wales and based in Amsterdam, Peter Greenaway is an acclaimed filmmaker and multimedia artist. Greenaway trained as a painter at Walthamstow College of Art in London before moving into film in 1966. He has made twelve feature films and some 50 short-films and documentaries, and has been nominated for the film festival competitions of Cannes, Venice, and Berlin. His first narrative feature film, The Draughtsman¹s Contract, completed in 1982, received great critical acclaim and established him internationally as an original film maker—a reputation consolidated by his subsequent films The Cook, the Thief, his Wife & her Lover and The Pillow-book, The Tulse Luper Suitcases, and most recently by Nightwatching.

Greenaway’s work in film has informed his installation work as well as his work as a curator at venues ranging from the Palazzo Fortuny in Venice and the Joan Miro Gallery in Barcelona, to the Boymans van Beuningen Gallery in Rotterdam and the Louvre in Paris. He has also written opera librettos and collaborated with composers such as Michael Nyman, Philip Glass, Louis Andriessen, and David Lang.

Leonardo’s Last Supper: A Vision by Peter Greenaway is part of the artist’s ambitious ongoing series Ten Classic Paintings Revisited, an exploration of works from around the world that encourages viewers to “retrain their gaze” when experiencing classical and Renaissance painting, and that creates dialogue between this age-old medium and modern technology. Greenaway launched the series in 2006 with an evocative multimedia exploration of Rembrandt’s Nightwatch in the Rijksmuseum in Amsterdam. In June 2008, he staged a one-night-only event with the original Last Supper in the refectory of Santa Maria delle Grazie in Milan. In June 2009 Greenaway exhibited his digital exploration of The Wedding at Cana by Paolo Veronese during the 2009 Biennale di Venezia and the film The Marriage about the same painting and installation at the Venice Biennial Film Festival. Leonardo’s Last Supper: A Vision by Peter Greenaway builds on the artist’s previous presentations based on The Last Supper, fusing elements from his extensive study of thousands of years of painting to create a spectacular and unforgettable encounter.

with the Italian Ministry of Cultural Heritage and Activities / Superintendency for Architectural and Environmental Heritage of Milan in collaboration with the Municipality of Milan/Culture, the Italian Trade Commission (ITC) and supported by the Italian Ministry of Economic Development. Additional support provided by the New York City Department of Cultural Affairs in partnership with the City Council, the Robert Lehman Foundation and the New York State Council on the Arts, celebrating 50 years of building strong, creative communities in New York State’s 62 counties.

Group discounts will be automatically applied when 12 or more tickets are purchased via online ordering.

Artist Talk: A Conversation with Peter Greenaway
Saturday, December 4
10:30am – 12:00pm
This Event is SOLD OUT!

Families will have the opportunity to participate in interactive workshops that guide participants to create their own visual art response to Leonardo’s Last Supper: A Vision by Peter Greenaway.